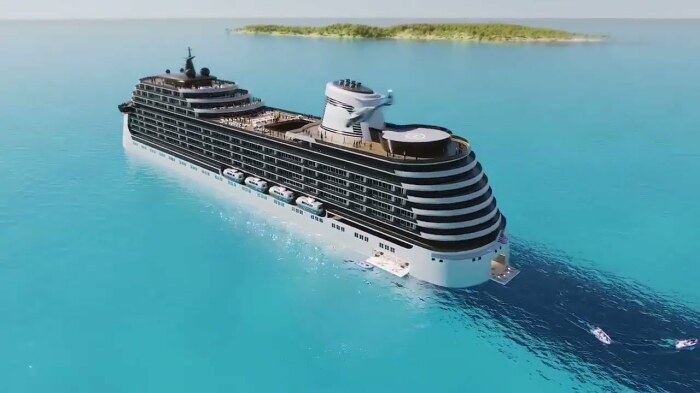 People are divided into two types. The first think that a cruise ship tour – this is the most useless and unnecessarily expensive way to get away from the daily grind and gain strength. Others think that a vacation somewhere in the middle of the ocean is just a real “vacation” in the full sense of the word. Regardless of who is more right, traveling on cruise ships does cost a lot. Sometimes the staterooms even cost a million “evergreens”.

What could $1.5 billion be spent on? To fight hunger and chronic malnutrition, to develop telecommunications technology in inaccessible regions of the planet, to try to cure people of complex diseases, to develop irrigation and water supply systems in arid regions of the planet. We can also spend 1.5 billion “evergreens” on more mundane tasks. For example, to modernize existing industries and create new jobs for ordinary working people. But no, it’s much better to spend $1.5 billion on luxury consumption by building a passenger liner with 547 apartments ranging from 22 to 133 square meters.

It is called MV Narrative. Will there be a place for honest toilers on the liner? May be, for honest workers of the board of directors of some large company or even corporation. The fact is that the “cabins” on the Narrative are not rented or ticketed. They are sold as elite real estate. The price of the most modest one is $1 million. The most expensive – $8 million. However, rent of apartments on the cruise liner for “beggars” is stipulated all the same. To tell the truth, the contract should be concluded minimum for 24 years. In this case the most modest apartments will cost miserable 647 thousand dollars. Almost nothing is known about the technical details of the Narrative, except that the ship’s engines will run on liquefied gas.

The creators of the liner – the company Storylines and the Croatian shipyard Brodosplit. The owners of a miracle steamer promise that during one year the vessel will always follow the sun! MV Narrative will sail between one hundred cities, each of them staying for 1-5 days. In selected places the liner will stay for 1 month to give the lucky owners the opportunity to go on land voyages as well! On a ship with a length of 230 meters there will be at least 20 bars and restaurants, sport and gyms, beauty centers, swimming pools, stores, laundries, hospital and so on at the disposal of gentlemen with nice faces. One can say that MV Narrative is a real elite settlement, sailing on the waves of the sea.