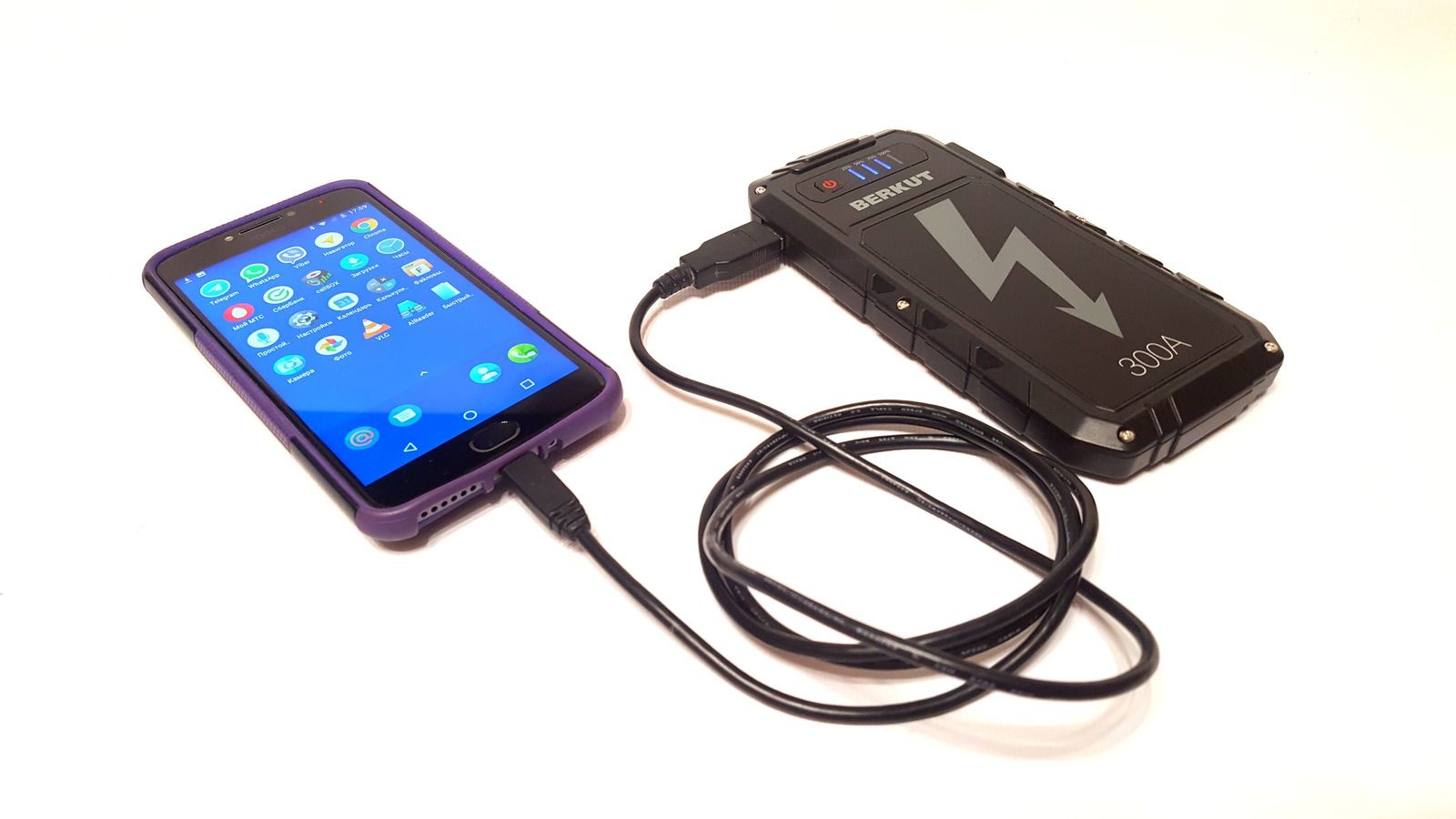 Just 3-5 years ago I had to spend a lot of effort to convince readers and friends / acquaintances from my personal circle that a gadget the size of three packs of cigarettes can start the car engine with a dead battery and even NO BATTERY at all without any trickery. Many people just couldn’t get it into their heads how a compact 500-gram “starter” replaces a classic 15-kilogram lead battery…

However, the periods of distrust and enthusiasm are long gone and today portable lithium-ion “boosters” or “jump-starters” as they are also called, are familiar to every car owner, and for many have become customary helpers, not once helped in an emergency situation. But these extremely useful and convenient devices have one big disadvantage… They, as well as any lithium batteries should not be kept in frost to avoid discharging and damage. You can not leave them in the glove compartment or trunk of the car, so that they are always at hand. No, it’s certainly not forbidden in the summer! But nine out of ten cases when we cannot start the car because of a dead battery, are in the autumn-winter period, let’s be honest. And it is not very convenient to carry always a quite big case with “booster”, its alligator wires and different accompanying small stuff. And as a result, the law of the sandwich works – the starter is not at hand exactly when you need it… You’re at work and it’s at home… You’re in the garage and it’s at home…

The reason is that most starting “boosters” have excessive power. The manufacturers try to make them as universal as possible for any vehicle, installing batteries with a large reserve capacity and starting current value. Most “boosters” are able to start the city gasoline hatchback with a liter motor, and a commercial diesel truck with an engine under 5-6 liters! Certainly, it is cool, but not always… Even those who have already felt what it is like to run around in search of cigarette lighter and how it is nice to start without outside help, quite quickly become lazy to carry a booster with them all the time. As in an average driver’s bag with documents and keys, it does not fit, and the backpack is not convenient for everyone. As a result, the considerable money paid for the gadget doesn’t help. You’re in the car with a dead battery here, and the “starter” is at home…

“The size of a smartphone.”

Redundancy is not always useful, so for owners of cars with small-volume engines, there is a useful tiphack. Namely the tiny starting devices which are not calculated on starting of powerful motors and moreover – of monster off-road cars and different commercial vehicles, however they will reliably start your car with a small capacity motor.

For example, an ultra-compact and lightweight “booster” BERKUT JSL-9000 is designed for gasoline engines up to 1.6 liters. And at the same time it has dimensions equal to… a smartphone!

In both photos next to the starter there is a smartphone with a 5.5-inch diagonal screen, which is not large by modern standards!

Are there many cars with a gasoline engine up to 1.6 liters? Yes, a lot – and every year there are more and more with the modern trend of expansion of turbo segment and demand for budget models with atmospherics of small power.

In addition to the huge fleet of used cars, today, a good half of the cars sold new in our market fall within the “gasoline under 1.6” range. Of the new ones we can name:

Toyota Corolla and the base model C-HR.
Volkswagen Polo, Jetta and inexpensive modifications of the Tiguan.
Skoda Rapid, Octavia, Karoq and even inexpensive versions of Kodiaq.
Kia Rio, Ceed and part of Cerato.
Hyundai Solaris, part of the Creta range and the basic Elantra.
Renault Logan and its variants, gasoline-powered Duster except the two-liter, turbocharged and atmospheric Captur and Arkana.
Citroen C3, C4 with turbocharged and atmospheric gasoline engine and even C5 with turbocharged gasoline engine.
Peugeot 406 gasoline, gasoline 2008, 3008, 5008.

Also on the list is a good half of the LADA lineup, excluding modifications with 1.8 engines, and many models from Chinese manufacturers that have gotten accustomed to our market – Chery, Geely, Changan, and others. All these cars are equipped with petrol engines ranging from 1.2 to 1.6 liters, and in the case of a flat battery it is started by a miniature starter BERKUT JSL-9000.

BERKUT JSL-9000 is an ordinary starter booster with the traditional for such gadgets set of functions. But it is very small! With housing dimensions of 170×81 millimeters, 17 millimeters thick and 250 grams in weight.

Actually, this is the main advantage of the device. Yes, JSL-9000 will not start the car with a large-capacity engine, diesel, and even more so – the truck. But if the volume of your car petrol engine does not exceed 1,6 liters, is it necessary to buy the device with reserve capacity “for your uncle” so that it would be forgotten at home in due time because of its excessive dimensions and weight?

But the compact device with the size of a smartphone can be absolutely easy to carry with you, using it as a power bank for charging your cell phone and keeping the cable with crocodiles in the glove compartment or the trunk all year round, because the wires are not afraid of frost.

The JSL-9000 looks very similar to a rugged travel smartphone, except it lacks a display. On the sides of the solid (assembled with screws, not glue or snaps) housing there is a covered with a rubber plug power jack for “cigarette lighter”, a USB-socket with 2.4 ampere output current for charging smartphones and tablets, as well as micro-USB for charging the gadget itself. On the top end is a small single diode flashlight, which uses a button to switch alternately between three modes – constant glow and slow / rapid emergency flashing. Next to the button there is also a four segment charge indicator showing 25, 50, 75 and 100%. The built-in battery capacity is 7000 mAh.

As with most such lithium-ion starters, there is a large “box” on the crocodile cables, combined with a connector. This is a block of automatic protection against polarity reversal – a very important element, which does not allow in a rush to mix up the terminals on the car battery or black “crocodile” with red and thus connect the plus with the minus. You can do it the other way around, but it will do no harm to your car’s electrical system or to the gadget itself, because the built-in powerful relay in the safety unit closes its contacts only when connected correctly. And if you mix it up, you will only hear a beep requiring you to swap wires.

In addition to the notorious polarity reversal, the design of BERKUT JSL-9000 includes all conceivable protections:

BERKUT JSL-9000 copes easily with the engines volume specified in the manual, that is gasoline up to 1,6 liters inclusive, not less than ten times in a row starting the motor with a dead battery on a single charge. Honestly speaking, it is not interesting to wind up what is supposed to be started… So we are going in search of more severe and explicitly prohibited by the instruction tests for the gadget, especially since in Moscow and the region just passed a week of unusual for us frost with 20-25 degrees at night and many motorists who temporarily moved to public transport, and were unable to start when the more familiar near-zero temperatures returned. For hard booster tests we decided to limit ourselves to 2-liter motors and easily found the needed cars, whose owners stood by the hood with “cigarette-lighter” wires waiting for help.

The first car we found was a Mercedes E200 with a 2L engine M274. BERKUT JSL-9000 is fully charged and kept warm in the inside pocket of the jacket at about 20 degrees. It is minus 3 degrees outside. It is easy to start the engine from the first try!

The next “client” is a Volkswagen Passat with a two-liter FSI engine.

We start the old car with the second attempt, after which on the indicator of BERKUT JSL-9000 a quarter of the charge is left, however we emphasize: this is a two-liter engine, while the manufacturer of the device in the instruction to it strictly limits the volume to 1.6 liters! We consciously act at our own risk to be sure that the device has reserve of starting current and power. And such reserve is available!

So, let us summarize. Despite of its tiny appearance BERKUT JSL-9000 is quite effective and optimal for owners of machines with engines up to 1,6 liters inclusive, as well as any smaller, including any motor vehicles – motorcycles, scooters, quads, gardening equipment with electric starter. The gadget with the dimensions of a typical telephone power bank and the motor can start, and performs the role of the very same power bank for every day with ease. And because of its compactness it is always with you, which is most important!

Despite our successful experiments with two-liter engines, JSL-9000 can not be recommended to owners of cars with engines more than 1,6 l. There is no guarantee of the successful start and the device works in extreme conditions, detrimental to its lithium-ion battery. For engines with a volume of 1.8-2.0 liters and higher are designed more powerful “boosters”, which are also present in the Berkut model range.