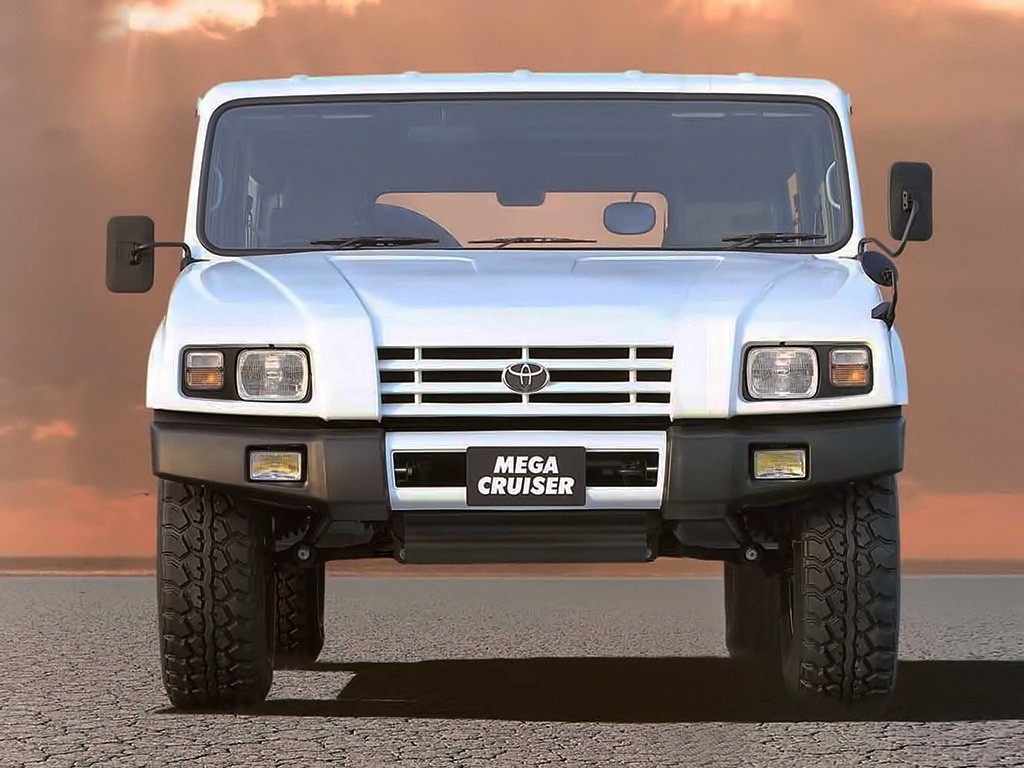 The history of Mega Cruiser appearance is quite simple: the car was developed as a military vehicle. Let’s leave the curtsy to the Humvee out of the equation: we will talk about the history some other time. From the point of view of purchase the Mega Cruiser is more interesting than the American colleague. If Hummer was made in 12 thousand pieces, Japanese cars were four times smaller, and a hundred and a half or two went into private hands. Of course, pop-up ads for military vehicles hint at the fact that their population “in civilian” can grow, but for the right variant still have to chase. Especially if you want not an army version with a tent top and the index BXD10, but conditionally civilian Mega Cruiser with a hardtop, which received a separate index BXD20. These trucks also were used as police and fire vehicles. But in due time Mega Cruiser still could be officially purchased new, but only in Asian countries and only with right-hand drive. The last circumstance is worth to be taken seriously, in fact it is not usual right-hand drive. The problem is not in weight of 3 tons and length of more than 5 meters, but in width of 217 centimeters. In such conditions driving a right-armed car is a separate pleasure.

However, the right-hand drive should not be taken seriously as a problem. Firstly, Mega Cruiser is not always bought as an expedition car – sometimes it is just a weekend car or a toy for off-road drive. Well, those who really go to them on the intercity, has long mastered the methods of getting out of the situation. There are enough variants – from installation on the left side of the camera for overtaking with display of the image in front of the driver to cardinal measures with re-equipment of the car into left-hand drive. The last one is certainly difficult and expensive, but it is quite possible to drive such modified Mega Cruiser on a regular basis. In fact the civil version compared to military one had not only some interior trimming, but also safety belts and even an air conditioner. And the absence of centralized wheel inflation system is a solvable issue.

It is rather senseless to speak about a condition of a body and its weak points while choosing a car, as we usually do, even taking into account its age. Let the Mega Cruiser was produced from 1995 to 2001, which means the age of 20-25 years, but the price and rarity make these SUVs the toy of affluent enthusiasts, and the army origin promises decent endurance. In general, it is extremely unlikely to meet a rotten or neglected car, but the traces of repair after off-road trips are quite possible. But usually the repair is either of good quality, or is connected with tuning, so it is necessary to estimate simply the care of the car, including anticorrosion and protection of exterior. Structurally the “Japanese” is rather simple: the base of the car is classical ladder frame, with full metal or open body. So, if the license plate is intact, everything else is solvable.

Curiously enough, with all the army background and great rarity Mega Cruiser has quite an official and complete parts catalog. But the solid part of the catalog can be considered as beautiful illustration material: the parts, despite the fact that they are original, are simply not on sale. It is easier to make a flat windshield to order than to wait for delivery of the original. Headlights are also exclusive, so you have to do some tuning. But the rear optics from the Dyna truck in non-original version costs pennies if you need it in the factory form.

The Mega Cruiser’s undercarriage is not as simple as one might assume. As well as in Hummer, suspensions here are independent, but, unlike “American”, torsion ones. An identical two-lever scheme with torsions in a role of elastic elements is used both in front and behind, and they are supplemented with massive shock absorbers. But that’s not all: the clearance of 42 cm is achieved due to the use of side wheel reduction gears. In terms of functionality, the result is beyond praise. In terms of repair, things are a little bit more complicated: not all parts can be found on the market. The gearboxes, for example, can be rebuilt: both bearings and other parts, including even gears, are available.

Torsions are also available for purchase, albeit for 45 thousand. In some little things like stabilizer rods, the affinity with the same Dyna truck and Coaster bus helps. But the levers, shock absorbers and other large parts have to be found, and the cost of components such as a complete rear or side-mounted gearboxes is hopelessly in the six figures. So the importance of service comes to the foreground: the Mega Cruiser, as it should be almost a truck, allows you to grease everything, to which you can attach a grease nipple. Ball joints, driveshafts and other joints demand regular lubrication and are ready to offer long service life in return.

Wheels deserve a separate mention. The matter is that the own rims with diameter of 17,5 inches are used here, that makes it impossible to select tires. As a result, the owners have to make up their minds. Many variants have been already invented: modification of disks from GAZ-66 or “civil” Toyota cars, custom-made disks and banal use of hub spacers for transition to another bore.

The design of Mega Cruiser brakes is similar to Hummer: there are disk mechanisms on both axles and they are not located on hubs, but moved to gearboxes.

Construction of a steering tube of this car is much more interesting. It would seem what surprising: a steering gearbox, power steering booster, and pulls. Surprising is that there are two steering gears here! Yes, the chassis is fully steerable, and back wheels turn in opposition to front wheels not by modest 3-5 degrees, but by as much as 12. Combined with the 32-degree angle of turn of front wheels it gives a significant advantage in turning radius and maneuverability. The connection between gears is mechanical, and there is an electric component, which automatically turns off the system 4WS (4 Wheel Steering) at speeds above 40 km/h. In repair, of course, it adds complications. Fortunately, the steering ends are unified here, so at least you can easily buy them at a reasonable price.

The transmission of Mega Cruiser is all-wheel-drive, of course, but the highlight is not in this, but in its scheme. The all-wheel drive here is permanent, with inter-axis differential, and axles are not only equipped with worm self-blocks, but also have possibility of forced blocking. That is it is possible to block forcibly all three differentials here and taking into account reduction gear, geometry and fully controlled chassis to receive practically unlimited passability. Check of serviceability of all this is certainly obligatory, as well as the condition of oils in transfer gearboxes and reduction gears. Fortunately, some little things in transmission maintenance will not be ruinous here: for example, cardan crosses are “universal” and cheap here, as well as flanges and forks. Thus, it is not offered to buy a cardan shaft assembly for a hundred thousand, as on modern crossovers.

The SUV received one gearbox – a four-speed automatic A443F from Aisin. This box is a cargo relative of the old, simple and very reliable A440/A442, which were installed on the ancient Land Cruiser. The only thing this box needs is change of some oil every 60-80 thousand km to save clutch, pump and other stuff. The cooling is also tied to oil changes – the filter should be changed every time. The main thing is not to save money on this very change, looking sadly at the filling volume of about 15 liters of transmission fluid. Trucking – Trucking costs.

Mega Cruiser has also got one engine: a 4.1-liter in-line four-cylinder 15B-FT diesel, which since 1999 received electronic injection and the appropriate index 15B-FTE. Electronics did not make it more complicated: it is a fairly simple cargo motor with a cast-iron block and cylinder head. However, there are four valves per cylinder, direct injection and supercharger with intercooler, which allows the engine to produce 380 Nm of torque. The engine life is also quite cargo, but the maintenance of the unit can sometimes throw complications. For example, the price of a new HPF is absolutely ridiculous, which means that it is necessary to find a master for quality repair of the old one. In general, there are nuances, but as a whole the small motor seems quite a logical choice for this car. In fact, in comparison with the same Hummer with its huge diesel V8, the “Japanese” seems a sample of practicality: the consumption in a country cycle is 12-14 liters per one hundred kilometers, and in the mixed one it is about 16-18. Thus, the tank of 108 liters may suffice for more than 700 kilometers.

And now, having received a general idea of what the Mega Cruiser is, we can try to make a portrait of the desired car. As we have already understood, actually there are three portraits here. The most basic is the original army car with a soft top, which can be found for about two million. A copy in good condition will look approximately like this.

Those who want to have a car not only for summer time trips off-road, but for high-grade exploitation, it is necessary to look for civilian version of Mega Cruiser with all-metal body and normal equipment. The problem is that these cars in original condition rarely appear on sale – for example, at the time of this writing there were none for sale on Avito. Well, the third variant is a modified car with an upholstered interior, body protection, as well as technical tuning up to replacement of the engine and left-hand drive.

Thus, the final choice is up to the buyer and depends on the purposes of purchase, planned scenarios of exploitation and available budget. Let’s not count on economy when buying Mega Cruiser, but you get more car for your money. In all senses.