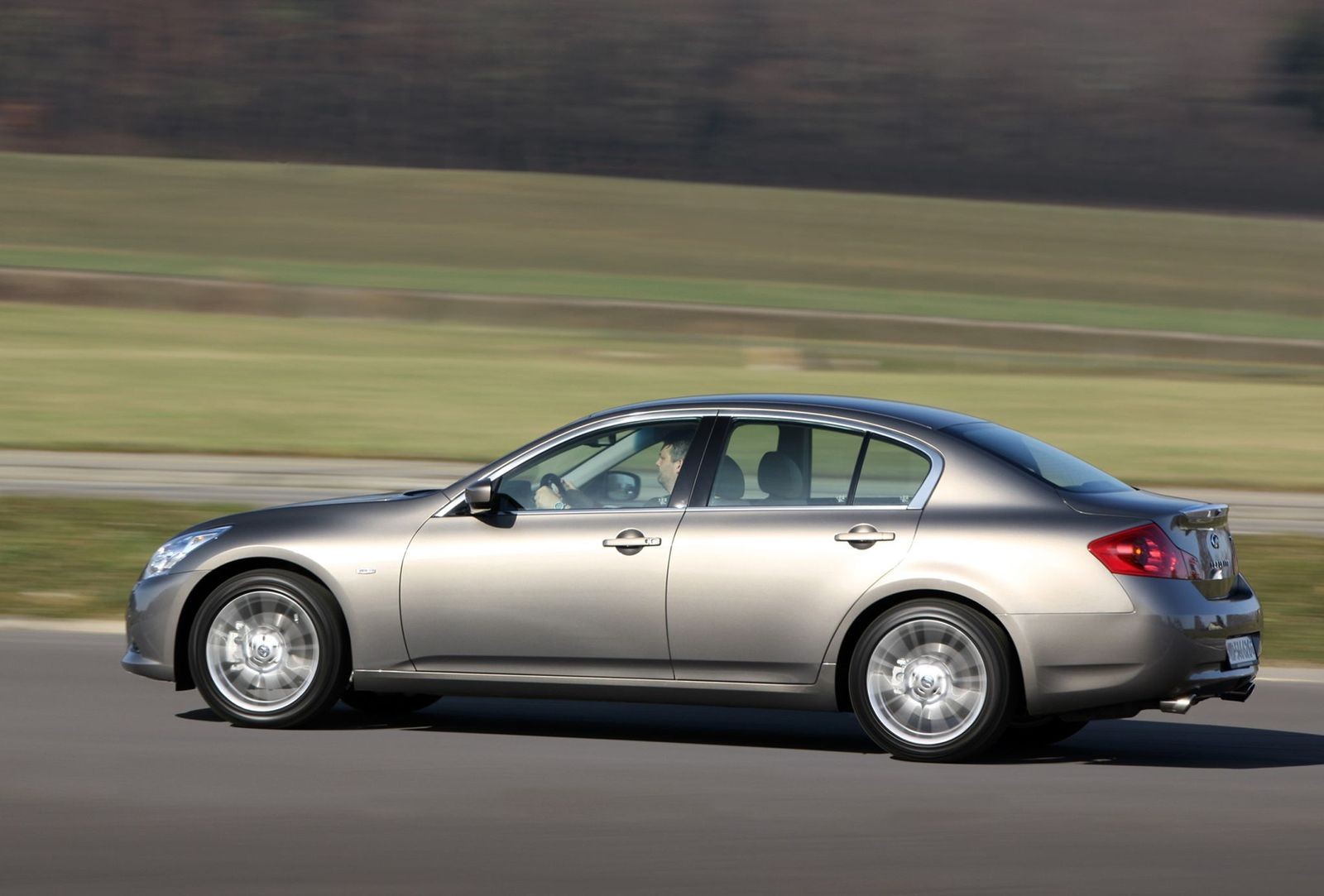 When choosing a new premium sedan ten years ago, buyers did not often think of Infiniti. Indeed, the “German three” in company with Lexus quite covered the demands of the main mass of consumers. And even those who wanted a rear-wheel drive coupe could go to the same address. All this, however, did not prevent Japanese to offer own variant of the answer to the same question, and it sounded briefly: G. Sedans and coupes were hidden under this number, named G25, G35 and G37 depending on the engine. Our colleagues from Avito Avto say that prices for them are generous to modern standards: one can start searches having about 700-800 thousands, and the most well-kept copies are asked for a million and more. Let’s look at what can attract the Infiniti G today and what difficulties will be encountered in the selection and operation.

The fourth generation of Infiniti G with the index V36, created on the same platform as the previous V35, saw the light at the end of 2006, and to us has arrived fairly quickly. However, the BMW 3 Series, Audi A4 and Mercedes C-Class were not expected to take a significant market share away from it, and even the Lexus IS had more tangible plans. However, the Russian market has never been the target market for Infiniti and the G line in particular: the main hopes were pinned on the United States. This largely explains the superficial adaptation of the model for our market. One of the main stumbling blocks was the high power without alternative. At a time when neighbors from Toyota and Lexus were stacking performance in a tax-friendly framework, Infiniti did not pay much attention to numbers, and the fourth generation of model G has kept the same “prohibitive” power figures as the third. Only near the end of the market career in the lineup appeared sedan G25 with 222 hp engine, which managed to get our share of attention and reminded us that even the wealthy audience is able to count the money. Quite a clear proof of this can serve the picture on the secondary market: sedans G37 produced since 2008, on sale at the time of writing the material was only 27, and G25, which appeared only in 2010, – almost three times more.

The body of the majority of cars kept well: the residual value is not too low, so that the care for cars decently, and the age of 8-14 years until critical. However, it is necessary to take care of the car carefully: paint coatings are rather delicate, and the technology of “self-tightening of scratches” exhausted its possibilities long ago. So, to age and operational defects it is necessary to react operatively. There are no “outstanding” features of aging in the Infiniti G, almost all the problems are typical for cars of this age. One of the most popular is swelling and peeling of the paint on the arches, especially the rear ones. In addition, it is often aggravated by tuning: the wheels with unusually small overhang can sandblast rear arches literally for one season of active driving. In general, repainted arches are rather a rule than an exception.

On the lower contour, besides arches, you should look for rust under plastic overlay of a sill: here the moisture and dirt are accumulated, and corrosion can crawl out of mounting holes of molding. Joints of wings with bumpers are also in the risk zone: usually it results in swelling of paint in this area. At the front, as always, you need to examine the hood and windshield frame, and at the back, especially in sedans, the trunk lid lower edge, which can be frayed and rusted. On sedans, rust sometimes appears on the trunk lid from under the beautiful aluminum overlay on the top, and the coupe has an even larger spoiler here, which also does not rule out problems. The road clearance of ridiculous 13 centimeters adds operational defects: both bumpers, and sills, and a bottom suffer, so the inspection of the bottom part on the elevator should be considered as obligatory.

In one line, let us mention another important circumstance concerning the body – the cost of the body parts. Despite the fact that Infiniti is not exclusive, the range of non-original components is very scarce. For many typical elements there are simply no substitutes, and the prices for the original are expectedly high. So, bumpers cost 25-20 thousand, the hood – from 60, and even the front wing will cost 15-18 thousand. In general, body repair is likely to be connected with salvage yards, including foreign, where you can order practically anything. And another thing: the probability of encountering a car G-series imported from the U.S. is unlikely, but the early G35, produced in 2007-2008, can still be “overseas”. For these cars would be good to check with Carfax for accidents and mileage, well, for dealer cars after 2008 would be enough to check with Autotech, where you can also find out the registered mileage, and history of accidents, and restrictions, and more.

Suspension Infiniti fully complies with the standards of the class: double wishbone in front and multilever behind. Dual Flow Path adaptive dampers with dual hydraulic circuits were offered as a proprietary option, but neither they nor the suspension as a whole are costly to maintain. For example, original shock absorbers can be bought for 10-12 thousand, and non-original ones are 1.5-2 times cheaper. Front lower ball bearing is standardly replaced along with the lower arm, which costs more than 30 thousand rubles, but the silent blocks are available separately. At the back the situation is similar: the tie rods are available for 4-5 thousand rubles apiece, and the large cross arms, even though they cost 20-30 thousand each, but they have the option to replace the rubber-metal elements. The only surprise can be the rear wheel steering system installed on the coupe. A new actuator costs absolutely unthinkable money, about 250-300 thousand, so if it breaks it will have to either be repaired or to plow through the disassemblies again.

The brakes are also simple: they are the same here as on the whole range of other Nissan and Infiniti models, including the 350Z, QX crossovers and so on. Mechanisms are without frills, with a floating crampon on a circle, except that there were two pistons in front. Ventilated wheels with diameter of 320 mm up front and 308 mm behind were the same for front-wheel drive cars with 2.5-liter engine, and for all-wheel drive 3.7-liter, and they cost about 6 thousand for the original, and 3 thousand for analogues. In general, everything is simple and quite accessible. The power steering supports the trend of simplicity: you can buy a rebuilt rack assembly at the price of repair, for about 30 thousand. The pump is also available non-original for 7-10 thousand instead of 30 thousand. All in all, nothing undecidable.

As was the custom in the class, Infiniti had optional four-wheel drive – though it was available only for sedans, and coupes and convertibles settled for rear, but with a viscous self-locking differential VLSD. The four-wheel drive system with the well-known name ATTESA E-TS is a multi-disc clutch, which is able to transfer to the front axle up to half of torque when the rear axle slips. Accordingly, when buying an all-wheel-drive car, it’s worth checking the all-wheel-drive operation and the condition of the oil in the transfer case, as well as listening to it on an elevator for noises.

In the world there were Infiniti G35 and G37 with manual transmission, but we do not have such cars – officially they are not offered, and privately they are not brought. In the absence of mechanics the choice is purely nominal: between five-speed automatic transmission Jatco RE5R05A, which was installed until 2010, and seven-speed RE7R01A of the same manufacturer. In general, both boxes are quite successful and reliable, but the first one is expected to be simpler and more durable because of its age. However, both units are very sensitive to oil purity and temperature, so it is better to change it not less often than once in 50 thousand kilometers. Seven-speed automatic is more aggressive and more inclined to the wear of torque converter lockup plates, and the box starts to kick after 100-150 thousand kilometers with dirty oil. Almost the same can be said about the five-speed box, though with good care and intermediate replacement of torque converter linings it will go 300 or 400 thousand km, and even more. However, the recommendation about checking running in a quiet mode is universal for both automatic transmissions: there should be no jerks and bumps. And in their absence, you can not bargain at once, but come in for diagnostics.

As we already know, the choice of engine at Infiniti G until 2010, in fact, was not: under the hood of sedans first registered 3.5-liter V6 with the index VQ35HR, and with the release of the coupe in 2008, the only option for all has become a 3.7-liter VQ37VHR. Only in 2010, an alternative in the form of a 2.5-liter V6 with the index VQ25HR appeared, producing 222 hp instead of 333 in the older brother. In general, all three engines belong to one family VQ, perfectly known and well proven in many models of Nissan, Infiniti and Renault, including popular in our crossovers FX, exotic Renault Vel Satis and so on.

Here is a reliable chain drive timing, distributed injection and a potential life of more than 400 thousand kilometers, subject to good maintenance with quality oil, attention to the cooling system and especially to catalysts, which even on older engines VQ35DE could spoil the piston and the financial situation of the owner. In the new engines offered for the G25 and G37, the VVEL variable valve timing and lift system also falls into the category of potential investments. There are expensive phasing controllers here – 30-40 thousand without the possibility to buy an analogue, but in general the maintenance of the motor can be considered as acceptable in terms of costs. Yes, replacement of the timing gear will cost a round sum, but its service life usually exceeds 200 thousand kilometers. So on the general background, especially taking into account the moderate prices on the secondary market, the main question when buying is the engine power and the transport tax that follows from it.

Well now, having briefly understood the main features of the choice and operation of the Infiniti G, you can form a portrait of a good copy. As we remember, the choice of 2.5-liter cars in the secondary market is even wider than that of 3.7-liter, so those who want to get a well-equipped sedan, but are ready to refuse a full drive and bright dynamics, can pay attention exactly to G25. Here is only to find well-groomed car with the minimum of owners and run about 150 thousand kilometers – approximately such.

Well and those who are ready to pay to get a maximum of style and impressions, can pay attention to G37s all-wheel drive sedans or G37 coupe with all-wheel drive chassis. The choice here is not so great, but there are still chances to find a coupe in good condition from the second or third owner – for example, this one. After all, acceleration in 5,9 seconds up to a hundred, bright appearance and interesting steerability are worth it?