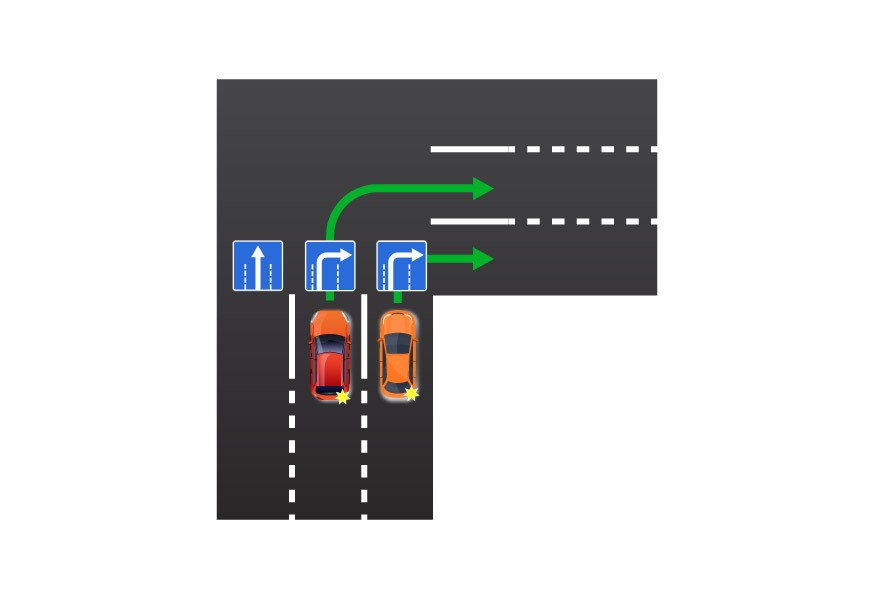 What is a lane, and how do you understand how many there are?

Before we start talking about lanes, let’s remember how traffic rules regulate lanes and how you can move if there are no marked lanes. So, according to the rules, the traffic lane is “any of the longitudinal lanes of the roadway, marked or not marked with markings and having a width sufficient for the movement of vehicles in one row”.

It is worth paying attention to the specification “marked or not marked with markings”: that is, if the width of the road from the curb to the dividing line allows moving in two lanes, it means there are two traffic lanes, and there are no restrictions on the actual number of lanes in the Traffic Code. Drivers themselves are allowed to determine the number of lanes in the absence of road markings: Point 9.1 specifies that in the absence of road markings and traffic signs the number of lanes is determined by the drivers themselves “taking into account the width of the roadway, the size of vehicles and the required intervals between them”.

What lanes are allowed to drive in the city?

The rules set different permissions for driving in the city and out of town lanes. According to the paragraph 9.4 “in populated areas, subject to the requirements of this paragraph <…> drivers of vehicles may use the lane that is most convenient for them”. The main restriction is set by the same paragraph 9.4: “On all roads with three or more lanes for traffic in a given direction, the leftmost lane can be used only in heavy traffic, when other lanes are occupied, and for turning left or turning right”. Thus, when driving in the city, you can occupy any of the available lanes, and if the road is free and there are three or more lanes, then any lane except the left one.

In paragraph 9.4 there is a small restriction for driving in the city. If the driver is driving in the built-up area, but on the road marked with the sign 5.1 (Highway) or 5.3 (Road for cars), or where the speed of more than 80 km/h is allowed, he should drive as close to the right edge of the roadway as possible, and is prohibited to occupy the left lane when the right one is available.

Two more restrictions for drivers of cars concern points 9.5 and 16.1 of traffic rules. Clause 9.5 specifies that if a car can not reach the speed over 40 km/h due to technical reasons it has to move in the rightmost lane, except for bypassing, overtaking or changing lane before turning left or stopping on the left side of the road in allowed cases. And point 16.1 prohibits driving such cars on the freeway.
Separately it is necessary to remember point 9.3 of traffic rules. It specifies that on two-way roads with three lanes marked with a marking (except for the marking 1.9 indicating reversing), of which the middle lane is used for traffic in both directions, it is allowed to enter this lane only to overtake, bypass, turn left or turn around.

What lanes can I use outside the city?

The lane order on the country roads is also regulated by paragraph 9.4 of the traffic rules. Here everything is much easier and stricter than in the city: out of settlements drivers of vehicles should drive as close as possible to the right edge of the roadway, and it is prohibited to occupy the left lane if the right one is free. Thus, driving even with the maximum permitted speed in the left lane is prohibited.

Clause 9.3 mentioned above is also relevant here – it prohibits driving in the lane where traffic in both directions is allowed, except in cases of overtaking, detour, left turn or U-turn.

Turning right is not a complicated maneuver, and it is regulated by the rules quite unambiguously. First, here is relevant paragraph 8.5, stating that before turning the driver is obliged to take in advance the corresponding extreme position on the carriageway intended for traffic in this direction. Secondly, the point 8.6 stipulates that when turning on the right the vehicle should move as close as possible to the right edge of the carriageway. Thus, in the absence of obstacles and obstacles, the right turn should be made from the extreme right into the extreme right lane.

The exception when turning right may be the situation when there are signs 5.15.1 or 5.15.2 before the turn, allowing to turn right from more than one lane. In such case the driver does not have to occupy the extreme right position on the carriageway. In such a case, the driver is not required to occupy the outermost right-hand position on the carriageway, but he should turn while maintaining the lane to avoid crossing paths: from the outermost right-hand lane to the outermost right-hand lane, and from the second lane to the second lane. If the road on which the drivers turn has an obstacle, forcing to turn in one lane, paragraph 8.9 of traffic rules comes into force. It specifies that “in cases where the paths of vehicles intersect, and the order of passing is not stipulated by the rules, the driver to whom the vehicle approaching on the right must give way” – that is, the rule of “interference to the right” is relevant here.

Separately, it is worth touching the intersections with circular traffic. Clause 8.5 states that when turning right when entering an intersection with traffic circle traffic, you do not need to take the rightmost position on the roadway. That is, entering the roundabout is an exception, and you can enter it from any lane. At the same time, exit from the intersection is treated as an ordinary turn to the right and is no longer an exception – that is, to exit from an intersection with circular traffic, you must take the rightmost position on the road. So, the short conclusion would be: you can enter the roundabout from any lane, but you can leave the roundabout only from the right lane.

The left turn is a bit more complicated compared to the right turn, because it usually involves crossing the oncoming traffic lane. However, the rules are a bit more relaxed. In terms of traffic lanes, the main requirement for the left turn is to occupy the leftmost position on the roadway according to the paragraph 8.5 of traffic rules. Besides, the same article says that if there are tramways of the same direction as the carriageway on your left, you should turn left from it, if the lane signs or road marking do not prescribe any other order. But there are no any requirements for the left turn lane in the traffic rules – i.e. you may turn in any lane, which is not prohibited by the rules. Thus, the driver can turn left from the leftmost lane into any lane, provided the traffic rules are observed. If there are streetcar tracks on the left and there are no traffic signs and lane markings, the driver can turn left from the streetcar tracks into any lane.

As in the case of turning right, the case of presence of direction signs in the lanes before the intersection, allowing to turn from more than one row, is relevant. Rules here are the same: it is not necessary to occupy the leftmost position on the carriageway, you can turn from any allowed lane, but it is desirable to keep the row and avoid crossing the traffic trajectories, giving way if necessary.

However, here, unlike turning right, there is another important exception. Paragraph 9.8 states that “when turning on the road with reversing traffic the driver must drive the vehicle in such a way that when leaving the intersection the vehicle takes the rightmost lane”. In this case, “changing lanes is allowed only after the driver is convinced that the movement in this direction is allowed in other lanes. This requirement is automatically fulfilled when turning right. But to turn left into the road with reversing traffic you may turn only into the rightmost lane.

We recently talked about the rules of turning in detail, so here we repeat the basic conditions. As well as turning left, you can turn from the leftmost position on the carriageway, and if there are streetcar tracks on the left side of the carriageway that are on the same level with the carriageway, from these streetcar tracks. However, there is an important exception: Paragraph 8.8 of the traffic rules states that with insufficient width of the roadway turn outside the intersection can be performed from the right edge of the roadway or from the right shoulder, giving way to oncoming and oncoming vehicles. At the same time there are no requirements for the lane, which must be left when turning, in the traffic regulations. That is, you can make a U-turn in any lane, provided that you comply with the traffic rules.

What penalty can be received for violation of traffic lanes and maneuvering rules?

You may get a penalty not only for making a wrong turn, but simply for driving in the wrong lane. As we remember, out of town and on highways, you have to move in the right lane, and taking the left lane when the right lane is vacant is prohibited. Those who ignore this rule may be held liable under Part 1 of Article 12.15: according to it, violation of rules of positioning of the vehicle on the roadway results in the imposition of administrative penalty.

There are several variants of punishment for violation of the rules of turning. The base penalty is provided for a turn from a wrong row. Failure to comply with the requirement of traffic rules before turning right, left or U-turn in advance to take the appropriate extreme position on the carriageway intended for traffic in this direction, entails a warning or imposition of an administrative penalty.

The following variant – non-compliance with the requirements of signs 5.15.1 and 5.15.2, indicating the direction of movement in the lanes. As we have already told, they refer to the signs of special instructions, and their observance has not advisory, but compulsory character. Accordingly, the turn or U-turn from the lane, not provided by the signs, is punishable. In the case of turning right, the penalty will follow: according to it, failure to comply with the requirements prescribed by road signs or roadway markings entails a warning or an administrative fine. Turning on the left and U-turn is punished according to Article 12.16 part 2 and the punishment is more severe: Turning on the left or U-turn in violation of the requirements prescribed by the road signs or markings of the roadway shall be punished by an administrative fine.

In addition to the lane direction signs, turning and U-turn can be restricted by prohibitory signs prohibiting right turn, left turn and U-turn respectively. The punishment will be the same as described above: for a right turn you may receive a warning or a fine, while a left turn or a U-turn is punishable by a fine.

But there are no separate penalties for occupying the wrong lane after making a turn – the violation is interpreted depending on the situation. For example, if the driver after making a maneuver is in the oncoming lane, he will be punished by a fine or deprivation of the right to drive vehicles for a period of 4 to 6 months.