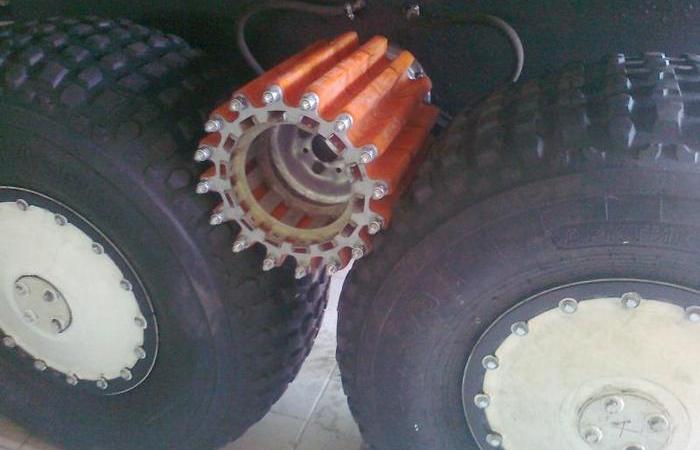 On some trucks, as well as construction equipment, you can see between the wheels some mysterious not something like a gear or a wheel. Obviously, nothing in machinery is done for nothing. That raises several questions: why is this mysterious thing needed at all, how does it work and, most importantly, what is its name?

A mysterious device between the wheels of a truck or construction vehicle, resembling a metal drum or a huge gear – this is nothing less than a Robson actuator. In common parlance, this device is much better known under the name “Medvedka”. The device is used to increase the cross-country capability of the truck. In the vast majority of cases, the Robson drive is mounted on a 2- or 3-axle truck with an axle arrangement of 6×2 or 8×2.

As can be easily guessed, there should be at least two of these drums on each side of the vehicle. The “Medvedka” works artlessly: with the help of a pneumatic or hydraulic drive, the device is lowered between the wheels and pressed tightly against them. Once the drive axle starts working, its wheels begin to rotate the metal cylinder, which in turn rotates the wheels of the non-drive axle. Thus the 6×2 wheel arrangement actually turns into a 6×4 arrangement, and an 8×2 into an 8×4. Due to this, the off-road capability of the vehicle increases, making it easier to drive in difficult conditions. For example, in deep snow or mud.

Interestingly, Robson’s drive was originally created for all-terrain vehicles. However, the device became widespread at the time thanks to the army trucks. Later, this device was imported to the civilian market. Of course, like any other mechanism, “Medvedka” has disadvantages. The fact is that the increased cross-country ability is paid for by noise and significant acceleration of tire wear. True, frequent replacement of tires is still cheaper than getting an additional tractor.