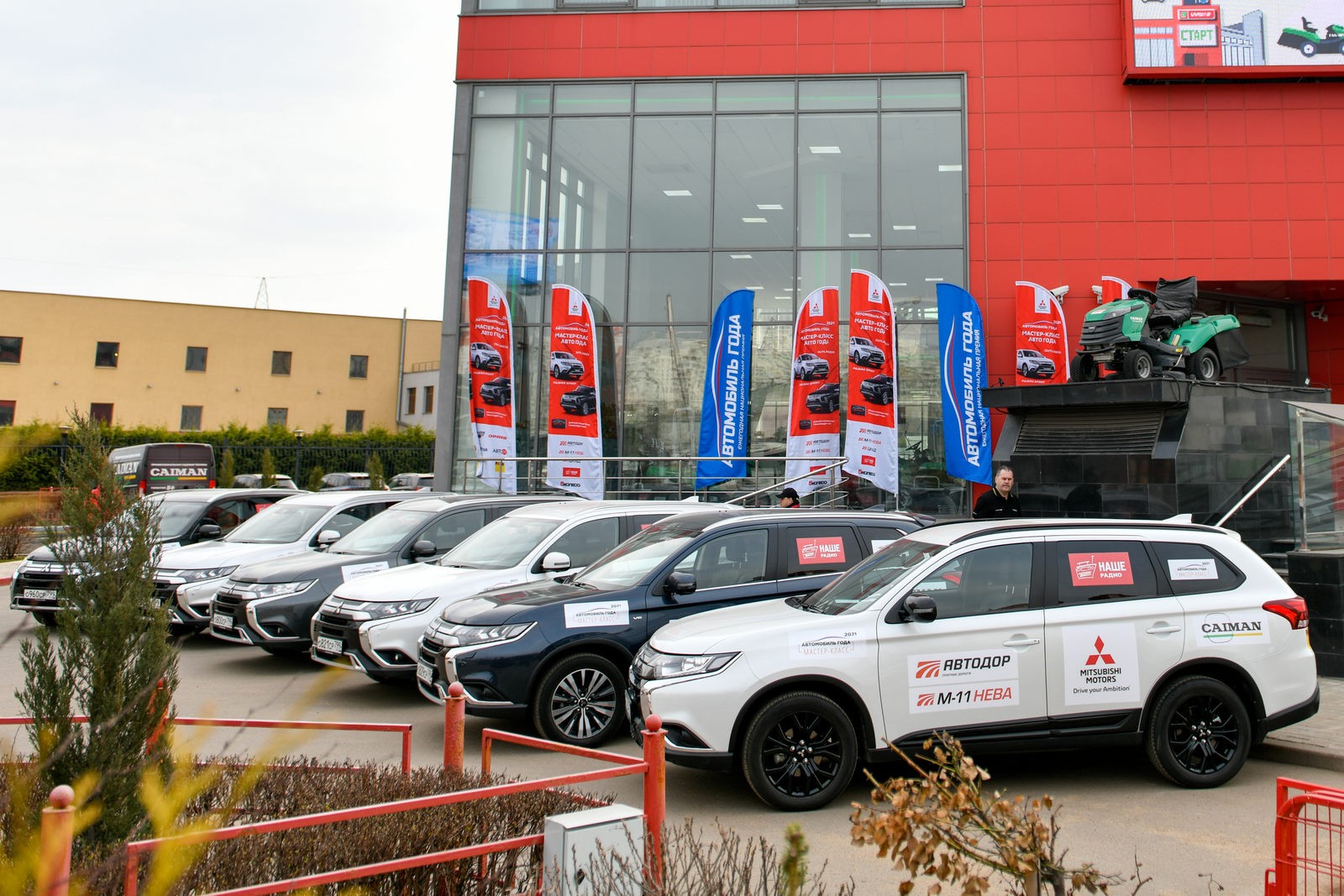 Such a master class was held in the middle of April on the roads of the Moscow and Yaroslavl regions. Traditionally, the most active voting participants and journalists take part in the event. They form several teams which have to compete with each other in ability not only to drive a car, but also to solve rather nontrivial problems. It was very important to establish teamwork. Believe me, it was not an easy task as many participants got acquainted with their teammates only after the draw made them members of the same crew. Well, as I have already said, the tasks we had to solve were very different.

It is clear, that the most part of tasks belonged to the category “questions from the sponsor”, and the main sponsor of event became Mitsubishi trade mark, which gave for the participants of a master class Outlander cars. It is hardly necessary to tell what this mass model is, in fact it can be fairly called “long-liver”: “Outlander” of the current generation have been sold in Russia for nine years already! Relatively recently, in August last year, we told about the latest updates which received the car. And in general the materials devoted to this automobile, appear with regularity of the courier train, in fact experts of the brand unequivocally consider that “a year without updating is a year in vain”. As a result Outlander though also does not take the top lines of the sales rating in the segment SUV, but enjoys steady demand as the most “family” of the medium-sized crossovers, perfectly suitable for long trips.

It was those features of the model, which ensured this reputation, that were devoted to a number of tasks. For example, it was necessary to find in the car a hidden A4 sheet, on which, in accordance with the traditions of quests, the following task was printed. Do you think it’s easy? It turned out that in Outlander there are a lot of hidden corners, and it is possible to get to some of them only in the process of transformation of the interior.

During one more task it was necessary to prepare the automobile for spending the night “on the roadside”, in fact Outlander is appreciated for the capacious interior, big space on the second row and possibility to fold seats so that the flat area is formed, on which the adult person can stretch in full height without problems. Thus, everything is provided for, there is even a special place, where it is possible to put a flexible curtain to avoid it getting in the way under a side. And all this – on the stopwatch.

The event took place at the recreation area on the M-11 “Neva” toll road. And not only because another sponsor of the event was the Avtodor company, the main operator of toll roads in Russia. It simply turned out that if you drive along the M-11 and the Central Ring Road, you can get from Khimki to Pereslavl-Zalessky almost three times faster than if you first push through traffic jams on the Moscow Ring Road, and then just drive along the Yaroslavsk Highway. And the only thing you need in order not to stop at every toll booth is to get a single T-Pass transponder. By the way, it is not only convenient, but also profitable: on most toll roads the use of the transponder means 15% discount, and on the Central Ring Road discounts can be up to 50%, depending on the length of the route.

Almost a third of the length of our route was on the Central Ring Road – a toll road alternate to the A-107, popularly called the “Little Moscow Ring” or “Little Betonka”. The history of this road is quite remarkable. It began in 1950, when it was decided to protect Moscow from possible air raids, even if in the strike will involve 1000-1100 enemy planes, and to protect with absolute certainty – because any of the broken through to the city bombers could carry a nuclear bomb. In August 1950, the government issued a decree mandating the creation of a separate Main Directorate under the Council of Ministers in addition to the First, which was responsible for the atomic project, and the Second, engaged in intercontinental ballistic missiles. Within the framework of the Third Main Department was organized KB №1, headed by Sergo Beria, son of omnipotent Lavrenty Pavlovich, and Pavel Kuksenko, known radio engineer. They developed the System-25, S-25, our country’s first air defense missile system. The system was named “Berkut” after the first syllables of its creators’ names. I have already told you about my journey through the abandoned facilities of this system.

The combat elements of the system, that is, missile launchers and radar detection stations were arranged around Moscow in three rings. The first, which included several control points, was located on the outer borders of the city, the second was 40-50 km from the center, and the third was about 100 km away.

Naturally, all these military facilities had to be supplied and maintained. Special roads were urgently built for this purpose. The system was put on combat duty in 1955, and for some time these roads were accessible only via checkpoints with special passes. Interestingly, many of the leading engineers and designers of missile design bureaus received such passes as bonuses, just so they could go to places exceptionally rich in mushrooms and berries. Naturally, there were no people in the forbidden territories!

Originally, the roads were paved in concrete, because they were designed for the movement of heavy forty-ton rocket trucks. By the way, contrary to popular belief, the pavement was not made of individual slabs, but of monolithic concrete, which was poured on technological segments, each of which had a length of about 200-300 meters.

Then the permit regime was relaxed, the inner ring in 1960 became the Moscow Ring Road, but the second and third rings remained “secret routes”, although the barriers were removed and the passes were canceled. But until the mid-80s, when the system “Berkut” was finally removed from duty, these roads were not on the maps and in automobile atlases, although the local population knew about them and willingly used them. In any case, in the mid-1970s we traveled from the Chashnikovo Bio Station on Leningradskoye to the MSU Biostation in Zvenigorod along the first Betonka road. The secrecy was finally lifted only in the early 90s. That’s when roads got official numbers M-107 (for the small ring) and M-108 (for the big one).

But the most difficult and interesting stage was the “car biathlon”: the participants had to shoot with rifles and laser simulators at the classic biathlon targets from a standing, lying and kneeling position, driving up to the firing position by car. But the spring turned an ordinary and seemingly harmless meadow into something almost impassable for wheeled transport. Not only Outlanders got stuck there, but also L200 pickups and Pajero Sport from support and collateral team. At the end of the fun it was necessary to wash the dirty cars, using high-pressure washers, provided by another sponsor, the company Caiman – of course, also for a while.

In short, the master class turned out to be interesting and very informative. And it is very important that by the Strugatskie brothers’ precepts “nobody left offended”: of course, the first place winner got the main and most substantial prize, but all the others received valuable gifts from the sponsors, and quite deservedly: the sporting fight was very tight and was practically on equal terms so the score difference between the first and the fifth place was only a few units.